Nicholas O'Donnell argued this case before the Supreme Court on Monday, December 7, 2020. CSPAN carried the live audio feed of the argument.

The audio of the argument will be on www.oyez.org within a couple days, and on the Court’s website at www.supremecourtus.gov by the end of the week.

WASHINGTON - The heirs to the Jewish art dealers who were forced to sell the medieval devotional art collection known as the Welfenschatz (in English, the Guelph Treasure) to agents of Hermann Goering in 1935 filed their brief today in the Supreme Court of the United States. It can be viewed at this link. The Supreme Court is set to hear argument on December 7, 2020, on whether the Foreign Sovereign Immunities Act (FSIA) and its "takings clause" create jurisdiction over the heirs' claims for restitution of the Welfenschatz—as all reviewing courts so far have held. The Welfenschatz is held by the Stiftung Preussischer Kulturbesitz (in English, the Prussian Cultural Heritage Foundation).

Two issues are before the Supreme Court. First, does the provision of the Foreign Sovereign Immunities Act of 1976 (FSIA) that establishes U.S. jurisdiction over claims concerning "rights in property taken in violation of international law" create jurisdiction for the Welfenschatz case? And second, even if the statute applies, is there some other doctrine that justifies dismissing the case?

The brief filed today explains that the FSIA provides jurisdiction. There is no clearer example of a violation of international law than the Nazis' orchestrated art looting, which Congress has called the "greatest displacement of art in human history." Congress even went out of its way in 2016 to confirm that the FSIA establishes jurisdiction over Nazi-looted art claims, consistent with decades of U.S. policy. Germany's effort to exclude the Nazis' German Jewish victims from our courts would rewrite the words of the law.

The brief explains further that Germany's plea for special treatment for the Prussian Cultural Heritage Foundation (sometimes referred to by its German acronym, the SPK) under a principle known as "comity" must be rejected. Comity means, more or less, the deference and respect that nations and sovereign actors offer each other. Sovereign immunity is the classic example of comity, but when Congress passed the FSIA, it displaced the old, inconsistent, case-by-case system of when courts abstained from hearing disputes involving sovereign entities. The FSIA sets the rules of the road—and they are hard to meet; Germany itself is no longer a party to the case as a result of the FSIA's text. Only the Prussian Foundation remains in the case because it holds the Welfenschatz and is engaged in commercial activity in the United States (the test under the law).

Sullivan partner Nicholas M. O'Donnell, who is arguing the case before the Supreme Court, said, "A 1935 transfer from German Jews to notorious art looter and war criminal Hermann Goering is the quintessential crime against international law, regardless of Germany's Holocaust distortion in defending this case. Congress has been clear for decades that these crimes offend international law. My clients only want their day in court to hold Germany to account for keeping this collection that it does not own."

Germany's revisionism has drawn the attention of the U.S. Congress, whose intent Germany has so badly misinterpreted. In direct response to Germany's shocking contention in this case, a bipartisan group of United States Representatives has written to Emily Haber, Germany's Ambassador to the United States, saying: "The timeline of the Holocaust is settled and sacred. This has been the bipartisan position of the United States Congress for a generation."

Such agreement among eighteen bipartisan Representatives two weeks before the 2020 election is extraordinary. This letter continued, "We are concerned that the brief your government has filed has attempted to distinguish the forced sale of the cultural artwork in question from ‘expropriation' under international law" and expressed further concern that "your government seems to be arguing that forced sales of art to the Nazi regime do not constitute takings at all and that the definition of genocide does not include what happened with respect to the full elimination of Jews from German economic life starting in 1933[.]"

Sullivan brought the case on behalf of Plaintiffs Alan Philipp, Gerald Stiebel, and Jed Leiber. Sullivan is assisted in this matter by co-counsel Markus Stoetzel of Marburg, Germany, and Mel Urbach of Brooklyn, New York, not members of the firm. The First Amended Complaint can be read here. The joint appendix to the Supreme court briefs can be found here, and the appendices to the petition that the Court granted can be found here and here.

The Supreme Court will hold oral argument in the case on December 7, 2020.

The Guelph Treasure, also known in Germany as the Welfenschatz, includes dozens of gilded and jeweled reliquary artworks from the 11th to 15th centuries that long belonged to Prussian aristocrats from the House of Brunswick (Braunschweig)-Lüneberg. In 1929, the Duke of Brunswick sold off the collection, with part of it going to a consortium of art dealers owned by the plaintiffs' ancestors and predecessors: J.&S. Goldschmidt, I. Rosenbaum, and Z.M. Hackenbroch. 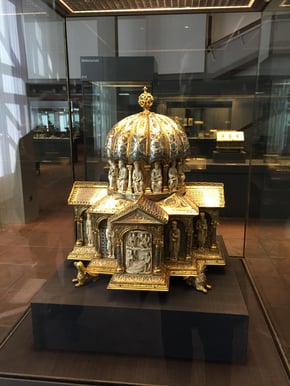 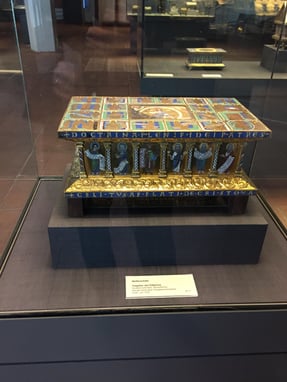 Two of the best-known pieces of the Welfenschatz.

In the 1930s, the Jewish ethnicity of those dealers brought them to the attention of Hermann Goering, whose titles as one of Adolf Hitler's top Nazi deputies included not only Commander of the Luftwaffe and President of the Reichstag, but also Prime Minister of Prussia.

The works were obtained by Goering's emissaries through a pressured transaction at a fraction of their worth, paid into blocked accounts to the members of the art owners' consortium. Some of the owners had already begun preparations to flee Germany; others followed soon after; one never escaped. Fees demanded by Nazi authorities as the escapees fled were then stripped from the accounts through harsh "flight taxes," as described in a Gestapo document.

Coerced selling of property was a common tactic of the Third Reich. The SPK/Prussian Foundation has claimed that the transaction was done at the owners "free disposal." But so pleased with the Guelph acquisition was Goering that, according to a 1935 report in the Baltimore Sun, he personally presented the collection as a "Surprise Gift" to Hitler.

Other documents show the then-Mayor of Frankfurt, shortly after the Nazi takeover, boasting in a letter to his "most revered" leader, "Reichskanzler (Chancellor Hitler)," about the potential to take advantage of the Welfenschatz's owners and seeking Hitler's personal assistance in setting the stage for the forced transaction. Another letter, concerning how to obtain the Welfenschatz from the Jews, is written between Paul Körner and Wilhelm Stuckart, Nazi leaders who later (among other crimes) wrote the Nuremberg Race Laws and participated in the infamous Wannsee Conference in which Hitler's "Final Solution" was formalized to oversee the extermination of all remaining Jews in Europe.